In South Korea, as many as 1 million dogs are intensively farmed for the meat trade every single year. The conditions on these farms are, unsurprisingly, horrific; so too is the grizzly end that these dogs meet. We’re all too familiar with the barbarity of this industry, so instead, we want to look at some of the truths behind the meat trade; the lesser-known ‘ins and outs’; and most importantly, what we can all do to help.

We were surprised to learn that 1 in every 4 South Korean households lives with a pet, many of whom are dogs. In fact, the country has undergone considerable change in recent decades, not just economically but culturally too: they’re becoming a nation of pet-lovers. Much like the UK, South Korea’s pet industry is booming with tailored food, high-priced photo shoots and fancy dress all on offer for those who want to pamper their pet.

While this wildly contradicts the horrors of the dog meat trade that we know exist, there is a reason that both sides of the spectrum are occurring simultaneously…

Simply put, it’s a case of “pet dogs” versus “farmed dogs” and the distinction between the two is heartbreaking. While pets are considered part of the family, it’s widely thought that “meat dogs” or “farm dogs” lack feelings. Some even believe that these dogs don’t have souls.

In South Korea, the most common dog on meat farms is the Jindo. In fact, 3 of our 5 meat farm survivors who recently arrived in the UK were Jindos, known for their intelligence, loyalty and sleek white coats. You might also find Mastiffs, Tosas and Spaniels who, amongst others, are categorised as “meat dogs” unworthy of affection or love. In some parts of the country, vets even refuse to treat them.

In contrast, seeing a Maltese on a meat farm would almost certainly cause public outcry.

Here in the UK, as a nation of dog lovers, it seems unfathomable to pit one breed against. Sadly, this isn’t the only contributing factor to South Korea’s relentless demand for dog meat. Contributing factors range from inadequate (and rarely enforced) animal rights laws as well as persevering cultural beliefs surrounding supposed health benefits. The result of this long-integrated “right” to eat dogs means that it’s mostly older, male citizens who consume the meat in the form of “boshintang” – a soup believed to invigorate the blood and reduce lethargy – or “gaesoju”, a tonic sold in traditional medicine shops. 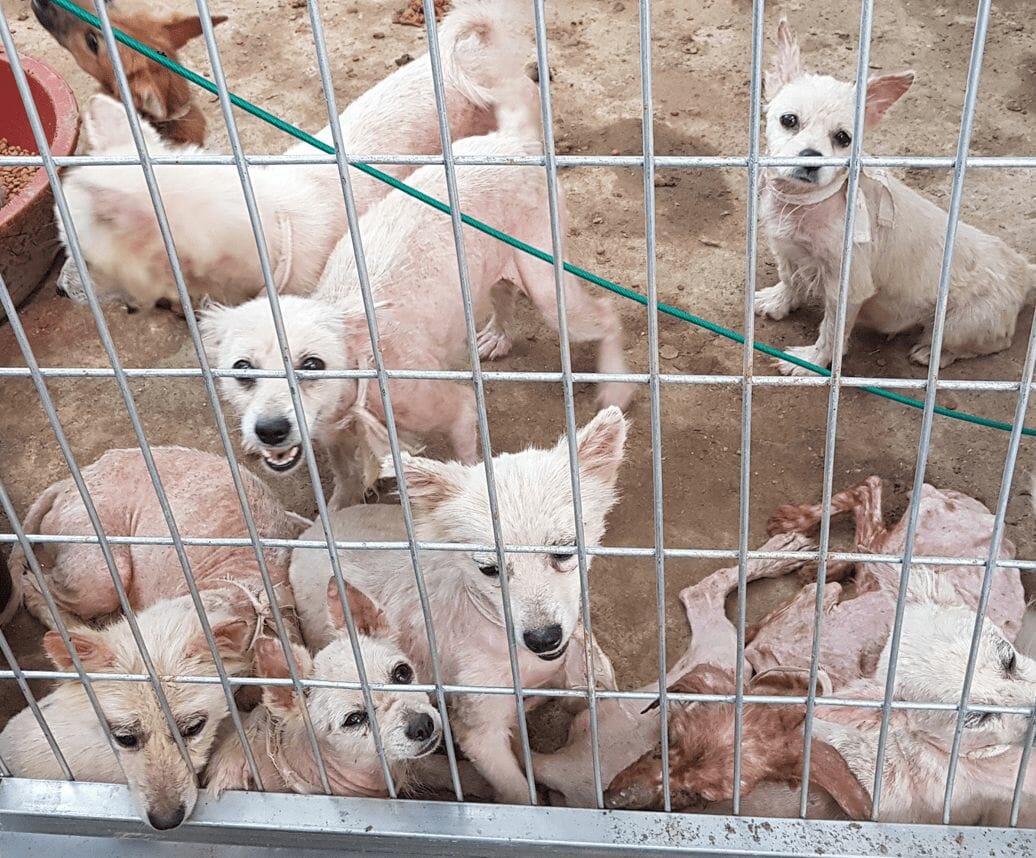 Is there any truth to these claims?

The most widely believed myths surrounding the consumption of dog meat include:

But there’s actually no scientific evidence to support any of these claims. In fact, dog meat actually poses huge health risks, such as Rabies.

The World Health Organisation (WHO) has recognised the very real threat of rabies passing to humans through the process of sourcing, slaughter and sale of dog meat. There is also the risk of numerous parasitic infections like E.Coli and Salmonella, as well as bacterial infections like hepatitis, anthrax and leptospirosis.

Despite these very real concerns, the belief that it is one’s “right” to consume dog meat is one that dates right back to South Korea’s beginnings. 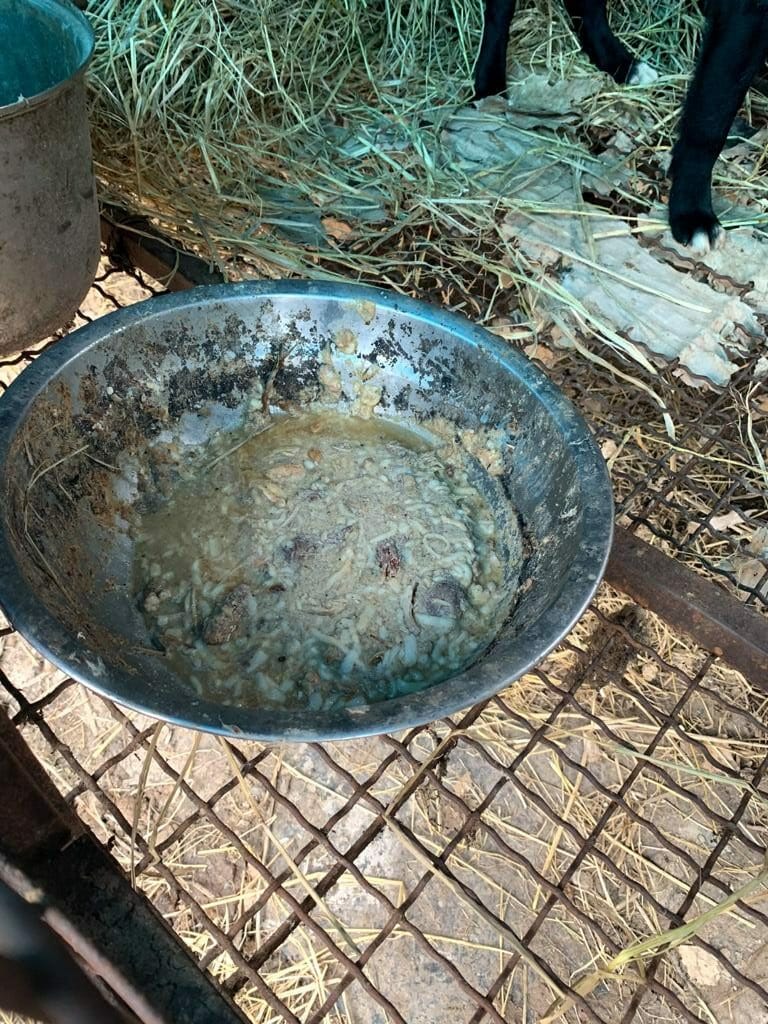 The consumption of dog meat is centuries-old and can be traced back to the country’s earliest beginnings thanks to historical evidence such as wall murals and literature. Throughout history (during war, for example) dogs have been a familiar food source and were even more plentiful than cattle, which were highly valued for labour, pulling carts or ploughing fields. As such, consuming dog meat was more about survival than choice.

Today, such survival instincts are unnecessary. So, as South Korea has undergone significant growth and development, so too has its cultural attitudes, making way for younger generations who are abandoning the tradition.

According to HSI’s 2020 opinion poll, around 80% of those who responded say they don’t or won’t eat dog meat. Almost 60% support a legislative ban on the trade.

This is a positive step in the right direction and we’re proud to be supporting that change, but until every cage is empty, there’s still lot’s to be done. 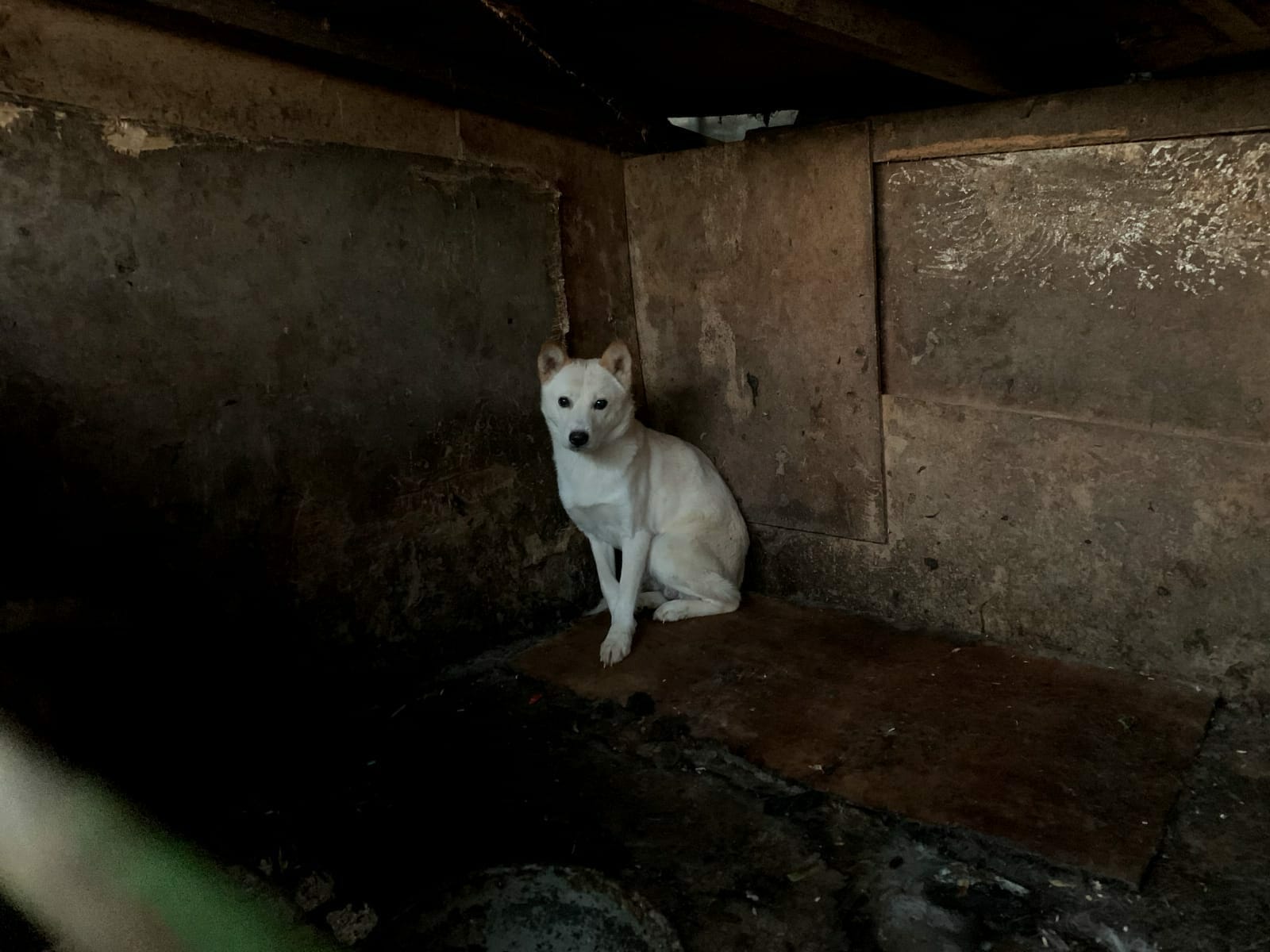 The ultimate goal is to end the dog meat trade once and for all. Thanks to the incredible work of charities like Humane Society International, Soi Dog Foundation and We ACT, that goal gets a little closer each year.

Here at Wild at Heart Foundation, we’d love to take a proactive approach to tackling South Korea’s long-integrated cultural beliefs. We’re firm believers in educating the next generation as a means of interrupting that cycle of misinformation and promote a kinder, more compassionate future for all. Sadly, it isn’t that straightforward…

Dog meat might be illegal in South Korea, but its consumption is not. Another grey area is that dogs are legislatively regarded as ‘livestock’ but not covered by the same welfare laws. Furthermore, its practices are widely absent from classrooms, which makes launching any kind of education programme virtually impossible.

Similarly, while sterilisation has helped alleviate stray dog populations all around the world, from South Africa and Thailand, to Puerto Rico and Bulgaria, the majority of dogs on these farms have been bred for purpose. As such, sterilisation would do little to stop the brutality.

Despite this, we’re determined to help – and so can you. 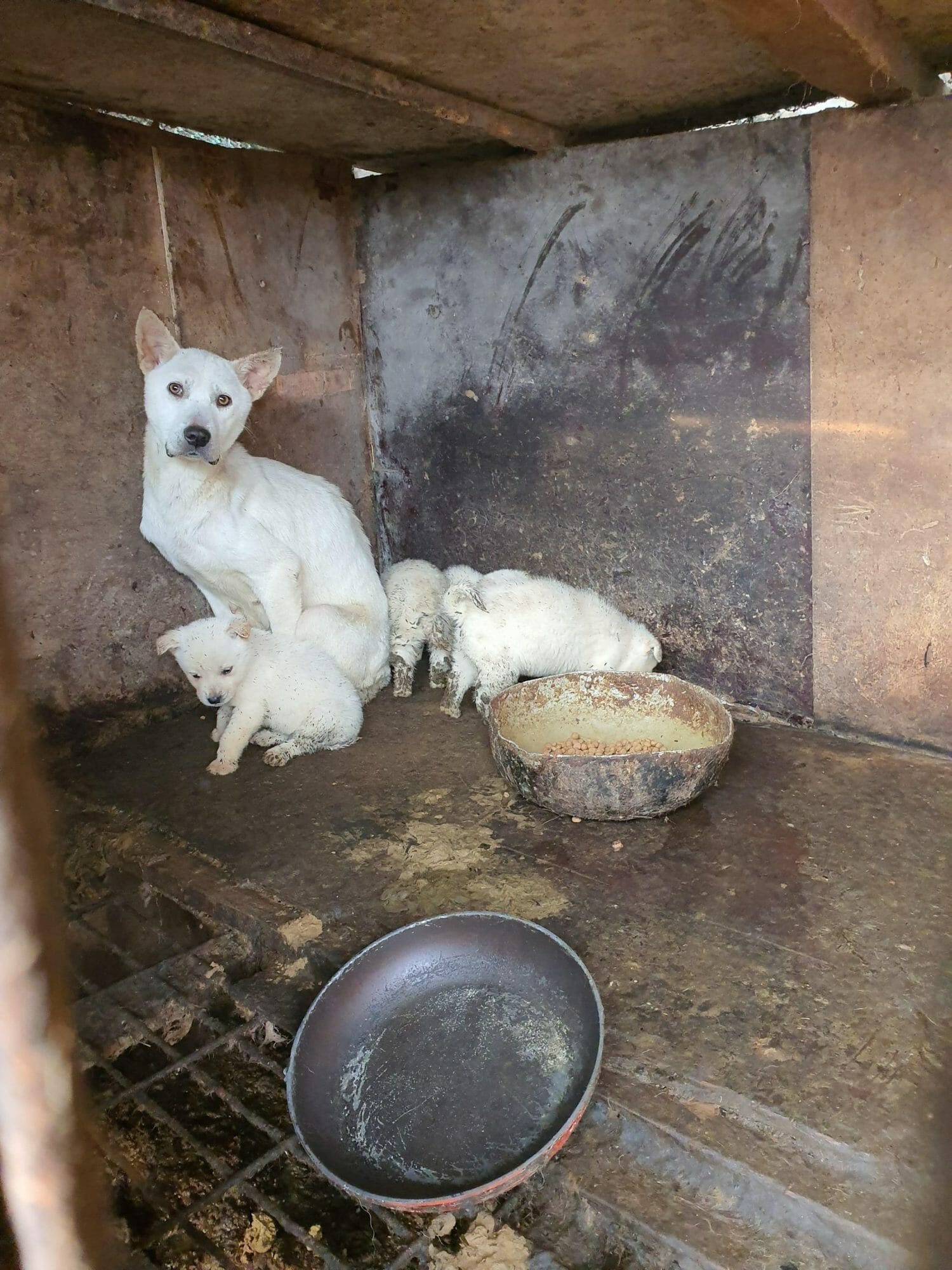 We ACT is a non-profit organisation working out of Korea, where their small but mighty team are closing down dog meat farms. Run solely by volunteers, We ACT liberate dogs from such conditions. They then rehabilitate them through foster care and find them forever homes around the world.

To date, they’ve saved over 600 dogs from a far more gruesome fate.

We’re incredibly proud to be supporting We ACT and have already adopted 5 beautiful dogs right here in the UK. But that’s just the beginning. This week, we’re hosting a South Korea “takeover” where we’ll be speaking to the team on the frontline; raising awareness and funds; and sharing some happy endings too! 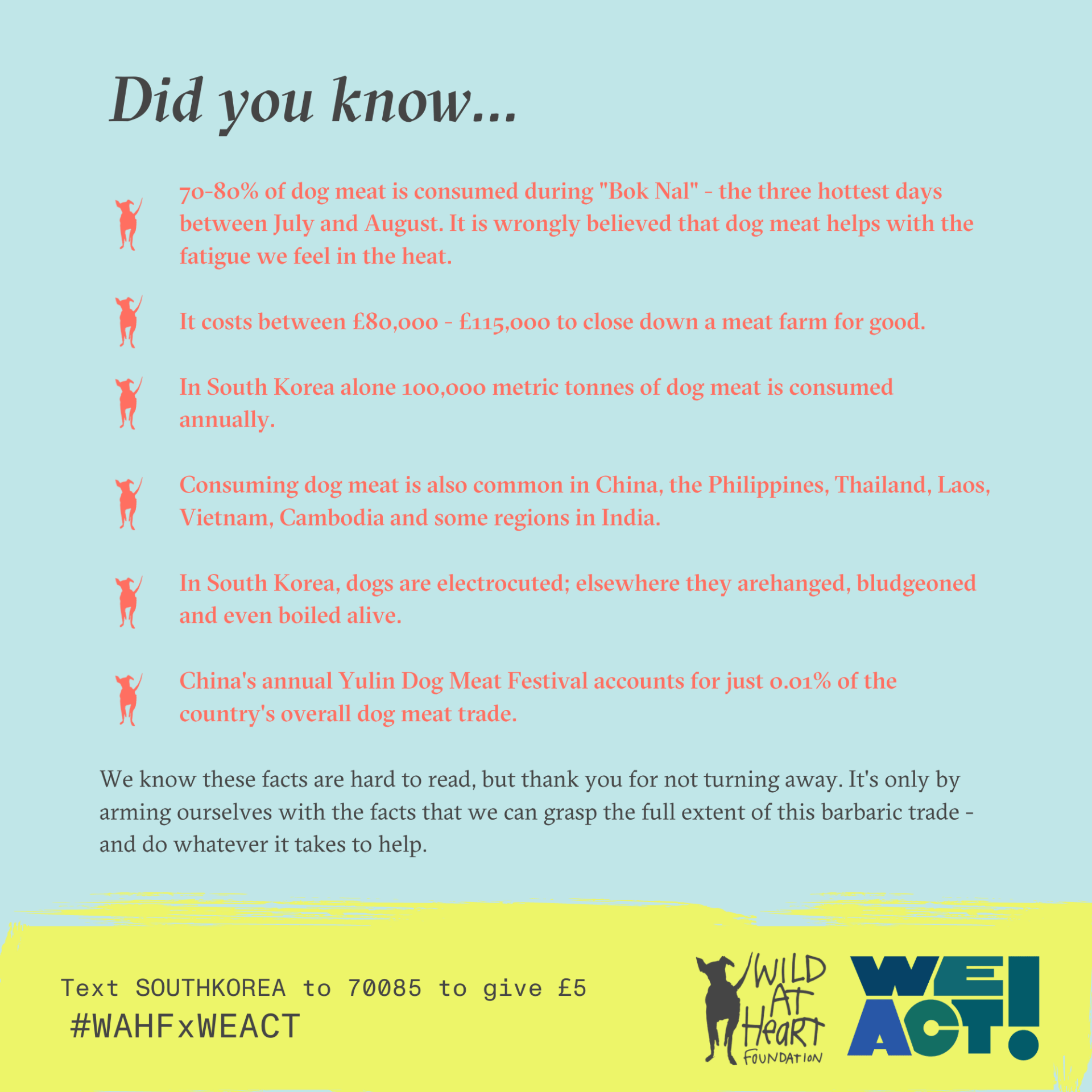 View all
Our Projects Our Mission
View basket ()