In early 2020, we begun a rescue mission to save two facially-disfigured dogs from Russia. Both had experienced horrific cruelty at the hands of humans, and yet they remain the most loving and resilient of souls. They teach us so much about forgiveness, love and compassion. It was our utter privilege to give these dogs the help, homes and treatment they deserved.

Here at Wild at Heart Foundation, we’re no strangers to dogs with more unusual needs than most. Familiar as we are with the brutal conditions in which millions of strays the world over live in, it’s sadly ceased to be surprising for us when we hear of dogs who’ve suffered horrendous wounds at the hands of humans. Limbs lost in traps or car accidents. Ears cut off. Eyes shot or stabbed. Bodies peppered with air-rifle pellets. Noses gouged out.

It was this last kind of abhorrent abuse that led us to Peggy. In December 2018, just as Christmas fever was beginning to set in, we were contacted about a sorry tale that we just knew we had to help with. A puppy had been discovered in a field, abandoned in a box with her ears and tail slashed to ribbons, and – most disturbing of all – her entire nose gouged out. That this was the work of human hands was immediately obvious, though the reasons for committing such a horrendous act of mindless cruelty are, as always, near-impossible to fathom. What we did know was that this was a dog who would be overlooked by most, written off as “too damaged” and therefore not worthy of saving. 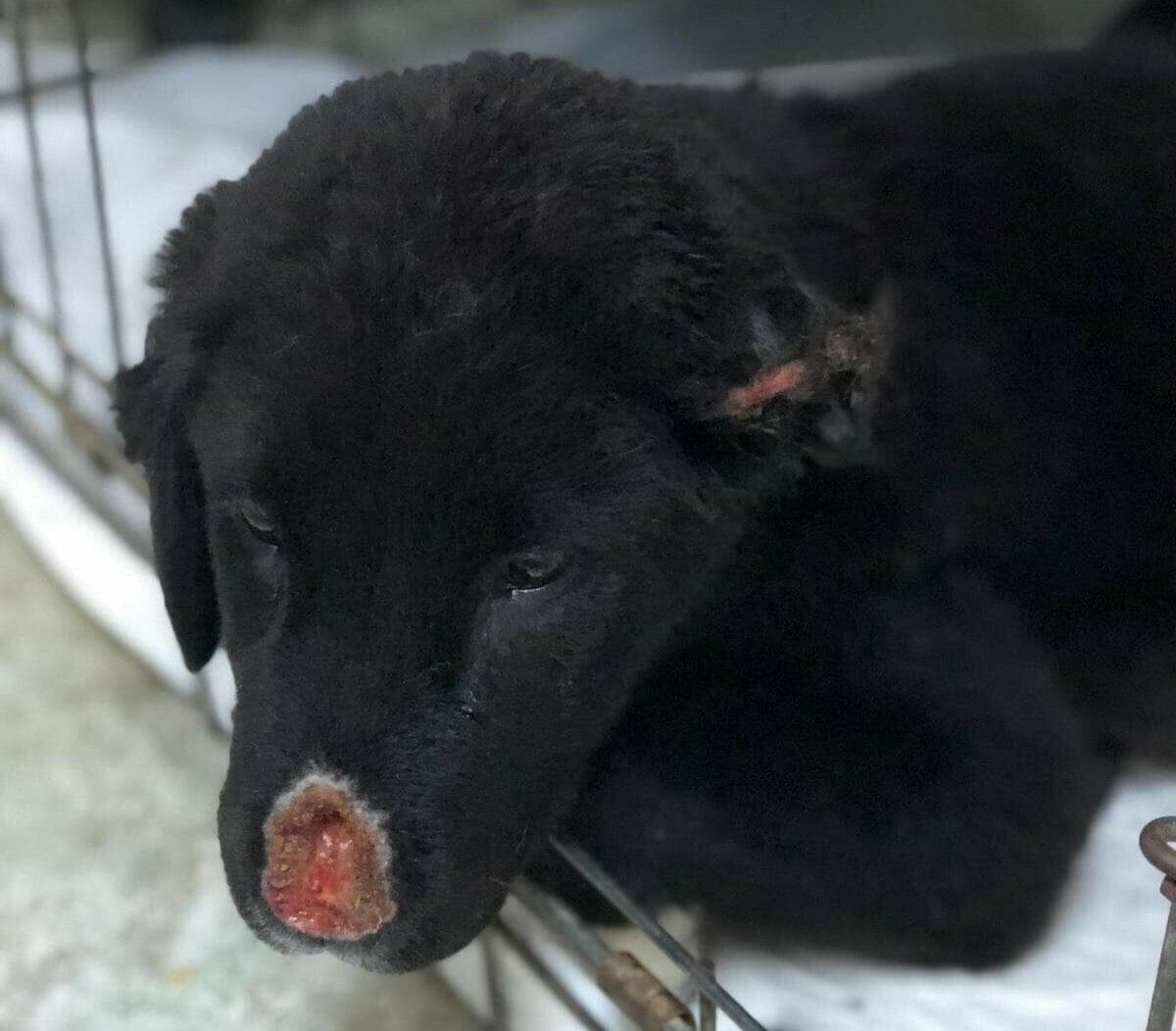 In spite of everything that had happened to her, Peggy remained a sweet, loving and happy dog.  In January 2019, Peggy flew to the UK where she was treated at an expert facility, and found the perfect family to give her the love she so sorely deserved. With her amputated ears and tail, and her tailor-made nose, Peggy certainly is a one-of-a-kind dog. So it was a truly amazing moment when we learned that Peggy would be appearing on the first ever print cover of Wunderdog Magazine – talk about rags to riches! And thank goodness she did, because her story inspired the most remarkable chain of events… 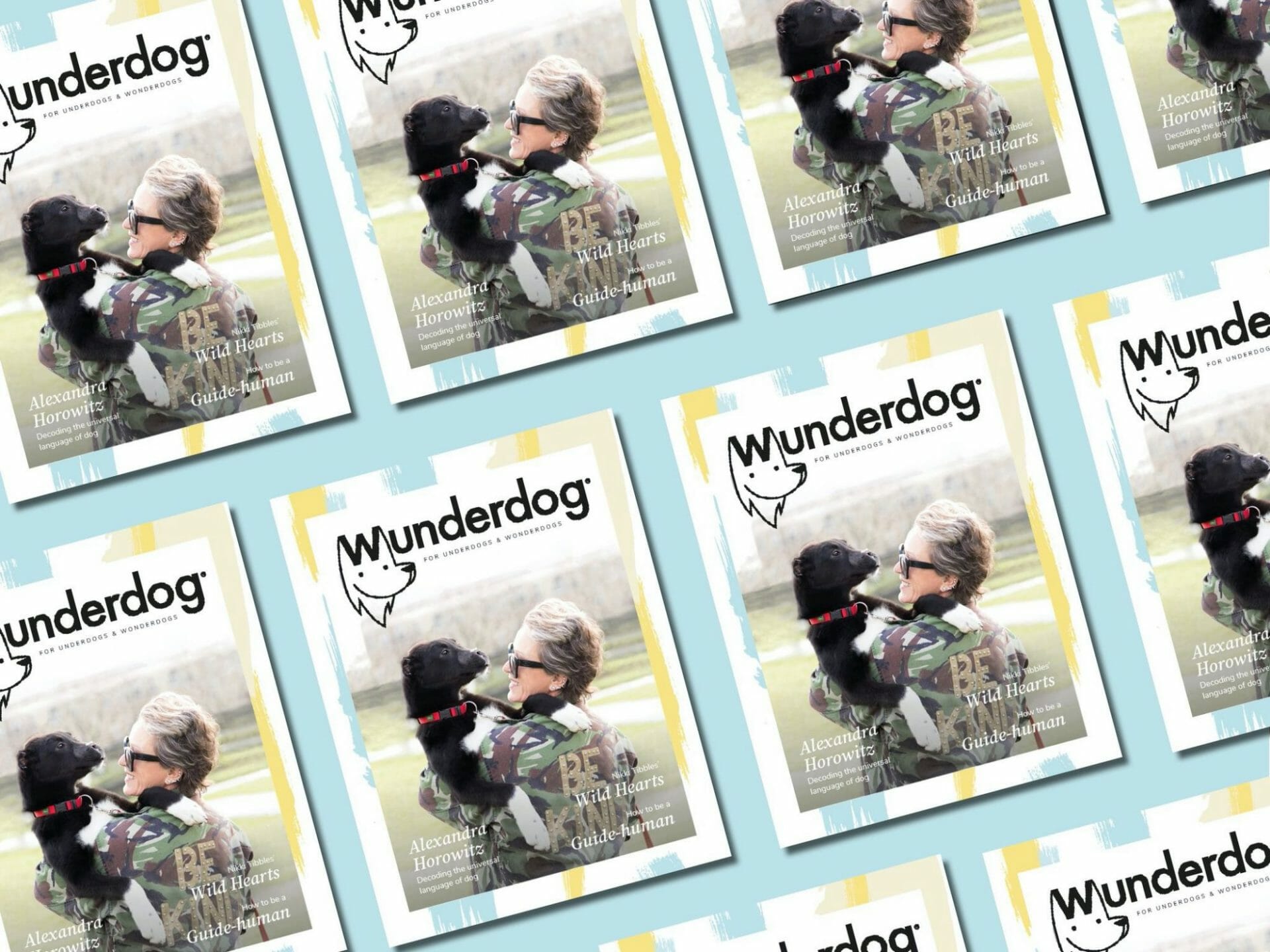 Months after the magazine was first published, a copy found its way to Russia where it was read by Ksenia. She couldn’t believe what she was seeing! For just weeks before, Ksenia had come across a puppy whose nose, tail and ears had been cut off. Worried he wouldn’t be able to live a normal life, Mitya had visited a number of vets and even had surgery to insert false nostrils attempted; but to no success. So when she saw Peggy’s photo she knew that Wild at Heart Foundation would be able to help! 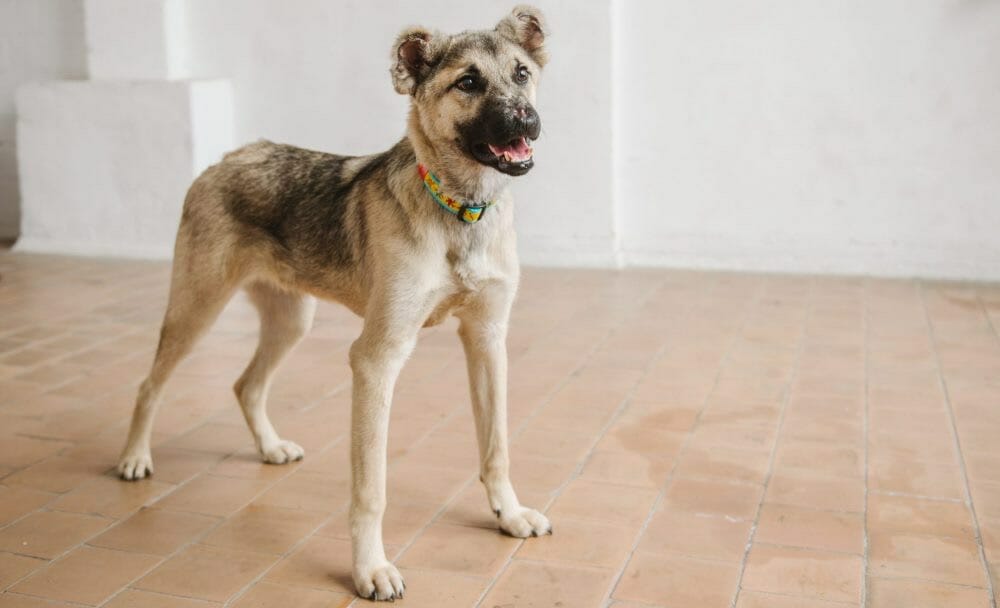 And Mitya was not alone. After reading Peggy’s success story, Wild at Heart Foundation superhero Kasey (Maggie‘s owner) began to see more stories of dogs who’d suffered similar injuries. She’d come across Millie, an innocent soul who’d suffered horrific injuries to the face. Millie was shot at close range, just like Maggie, and when Kasey saw her adorable face she knew she’d have to help. 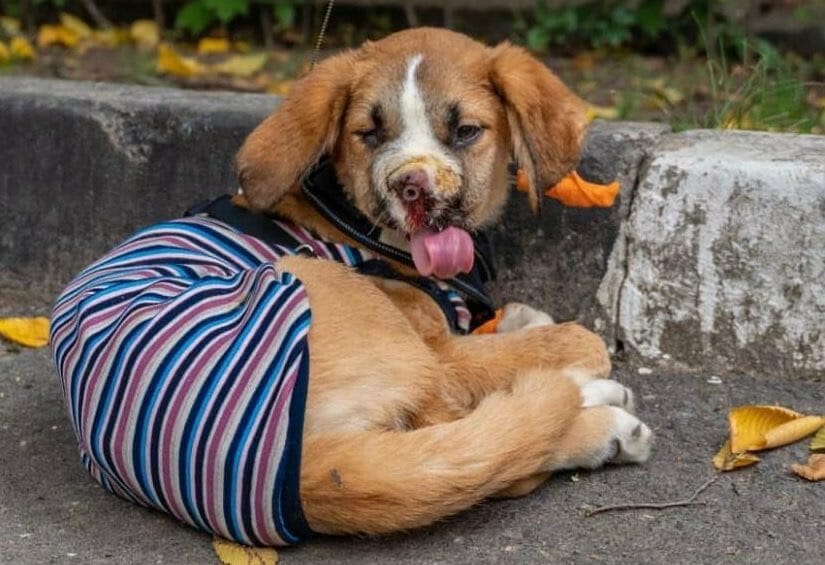 Of course, we were only too happy to lend our support and embark upon what has now become our first rescue mission of a new decade!

And so we learned the stories of these two remarkable dogs:

Mitya was only months old when he had his nose disfigured, and his ears and tail cut off. He was let loose in the world to fend for himself and, having sustained such brutal wounds, his chances at survival looked slim.

Mitya must have been terrified – his short life had taught him that the world was not a kind place. But thankfully, his luck changed forever when Ksenia noticed a small, cowering shape in the shadows of the bushes by her house. Aided by a lot of patience, kind words and chicken, Ksenia coaxed the pup into her care, and fell instantly in love with his big brown eyes and the “tr-tr-tr” noise he made when breathing through his throat. She found it so endearing that she named him Mitya after a well known Russian children’s book character – a loveable tractor!

But after multiple attempted surgeries to rebuild his nose, it became clear that Mitya would need specialist help. In fact a number of vets had suggested that Mitya be euthanised – finding him a home where he could get the love and treatment he needed was a matter of life or death.

Millie was just a tiny pup when she was shot at close range, just like her new sister Maggie. Millie lost part of her nose and has a severely shortened muzzle where most of her jaw had shattered and could not be saved. As a result, Millie has an extremely long tongue that hangs out of her mouth most of the time and can become very dry. But she hasn’t let her facial disfigurement dampen her spirits and continues to be the most fantastic and characterful pup!

Although she was able to breathe through a makeshift tube, this came loose soon after her arrival in the UK (she sneezed it out during a particularly rambunctious play session – testament to her love for life!) Thanks to the funding raised by the WAHF community, Millie was fitted with a permanent metal implant which allows her to breathe and eat as comfortably as any other dog.

Millie lives with her beautiful new sister @maggiethewunderdog – two dogs who have no idea that they’re any different from any other dog, and are as happy, healthy and loved as all dogs deserve to be.

Both dogs arrived in the UK together within just weeks of our learning about their story, and have since received incredible bespoke surgery to allow them to live a long and healthy life. (You can read more about Millie and Mitya’s recovery on our Instagram). They’re both enjoying all the luxuries that come with being in the most amazing adoptive homes: playing with their new four-legged siblings; enjoying long walks in the fields (and even longer snoozes on the sofa afterwards); and generally revelling in the experience of being loved, safe, healthy and happy at last.

Millie and Mitya’s story has moved hundreds of people to incredible acts of generosity. Inspired by Peggy, we want to make sure this amazing chain of kindness and change is paid forward to the next generation of pups in need. That’s why we set up the Remarkable Rescue Fund (previously the Millie and Mitya Fund), a dedicated funding grant that allows the rescue of many more dogs just like them! The fund exists to provide bespoke care, treatment and homes for hundreds more dogs with severe injuries and disabilities.

Please consider making a donation to this amazing cause – there are still thousands of dogs battling against the odds, just waiting for their chance at salvation.

We’d like to say a huge thank you to our utterly incredible community for raising the £12,000 needed to fund the rescue and treatment of Millie and Mitya in just one week! Without your generosity, this story would not have been possible. We are so very moved by your support, and are so grateful for the opportunity to change these two very special lives. Thank you x